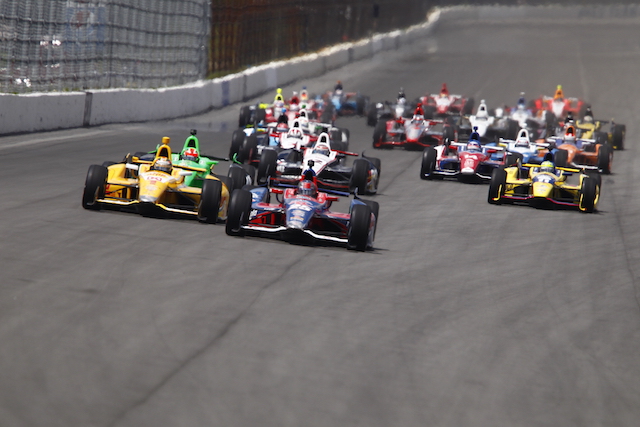 Aerodynamic tethers to minimise flying debris will be introduced to the Verizon IndyCar field for the 2016 season.

The move is the first tangible reaction toward greater safety following the tragic death of British racer Justin Wilson who was struck on the head by a dislodged nosecone from another competitor at Pocono in August.

High tensile Zylon tethers are among the safety enhancements that will be implemented on the Dallara IR-12 chassis.

A tethering system for the front wing main plane has also been designed by Dallara for Indianapolis, Texas and Pocono.

The latest tethering additions will supplement the existing wheel/suspension tethers that have been used in IndyCar since 1999.

“It is a continual goal to improve safety for all the participants, fans and drivers alike,” Will Phillips, IndyCar’s vice president of technology, said.

“We also need to do this in a fashion that does not create more yellow flag racing and try to prevent as much debris as possible.

“We have great support from our partners to improve safety and wish to thank Chevrolet, Honda and Dallara for their participation and efforts in working together to implement change.”

Other changes for the 2016 season include:

*A domed skid plate on the underside of the chassis, which improves its yaw/spin characteristics, will complement rear wing flaps that deploy at 90 degrees if a car spins and travels backward on a superspeedway.

The package will minimise the incidence of the car becoming airborne. The rear wing flaps have been tested in wind tunnels at General Motors and Texas A&M University.

Components are scheduled to be available for the April 6 test on the 2.5-mile Indianapolis Motor Speedway oval.

*An update to the Engine Control Unit (ECU) prevents a car from moving forward during a pit stop if the gearbox is not in neutral while the fuel hose is attached.

Through the ECU, the fuel probe activation sensor can stop the car from moving forward by returning the engine to idle and engaging the clutch if the car is not in neutral when the fuel probe is plugged in.