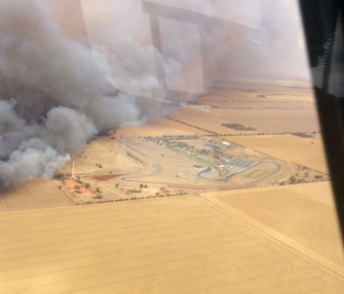 Mallala circuit staff have been evacuated as a precaution as out of control bushfires threaten the region in South Australia.

Scores of firefighters are tackling a blaze which has broken out at Pinery with the fire now affecting Mallala, north of Adelaide.

South Australian Country Fire Service have issued an emergency warning for the town.

A spokesperson from Mallala Motorsport Park told Speedcafe.com that staff have been moved to the town hall.

It is understood that the circuit itself has been unaffected at this stage but the fire had come close to a perimeter of the facility.

“The staff have been evacuated,” the spokesperson told Speedcafe.com.

“There is nothing on the track apart from one corner of the property which is quite large but it has gone past that.

“It was nowhere near any of our structures. There is huge smoke so that is why the staff have been evacuated.”

New South Wales is sending a DC10 (Southern Belle) to South Australia to assist in the emergency.

There have been reports of property and stock losses and unconfirmed reports of injuries.

Next Story Phil Brock to make racing return at Winton