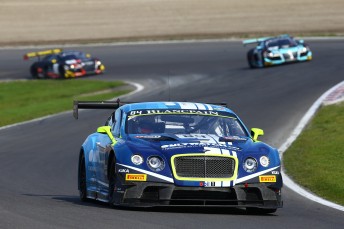 HTP Motorsport has ended its association with Bentley

Renowned German GT squad HTP Motorsport has announced plans to split with Bentley just a year into their alliance.

The outfit had been earmarked to field a possible entry in February’s Bathurst 12 Hour alongside the confirmed two factory M-Sport Bentley Continental GT3s revealed by Speedcafe.com earlier this month.

This year the HTP Motorsport squad won the Blancpain Sprint Series with Maxi Buhk and Vincent Abril, who are both Bentley factory drivers.

It remains to be seen if HTP Motorsport will field an entry into the Bathurst 12 Hour having missed this year’s event.

The squad featured heavily in the 2014 edition when their Mercedes SLS entry finished second behind the Maranello Motorsport Ferrari 458 piloted by Craig Lowndes, Mika Salo, John Bowe and Peter Edwards.

“We had a fantastic year of racing with HTP Motorsport,” said Director of Motorsport Brian Gush.

“Together, we took the Continental GT3’s first international drivers’ championship win and worked closely to develop and nurture their talented drivers by offering them opportunities in the works team.

“Obviously, it’s disappointing that the deal has come to an end but we look forward to racing alongside them in future and wish them every luck for 2016.”

Meanwhile, Bentley has also confirmed a two-year deal to return to the British GT Championship with Team Parker Racing.