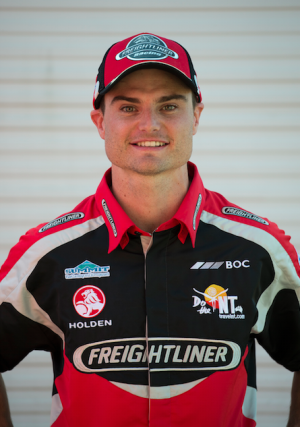 Brad Jones Racing has finally confirmed the signing of Tim Slade to its Freightliner Holden for the 2016 V8 Supercars season.

The deal, revealed by Speedcafe.com more than a month ago, sees Slade step into the seat vacated by the DJR Team Penske-bound Fabian Coulthard.

Slade moves to the Albury-based team from Walkinshaw Racing, with which he has endured a tough two seasons aboard its Supercheap Auto backed Commodore.

Although signing Slade directly after Bathurst, BJR had to wait for Walkinshaw to declare its plans – which finally occured at Phillip Island – before today’s announcement.

Team owner Brad Jones believes that V8 Supercars is yet to see the best of Slade, who remains without a race win after more than 200 starts.

“I am really excited as we feel Tim has untapped potential; which BJR have a history of uncorking with drivers,” said Jones.

“Talking to people who have worked with Tim say he has a great feel for the car set up.

“His good understanding of the vehicle and knowledge is something we are definitely looking forward to working with.”

“Tim is going to be a great addition to the team, he has all the attributes that we look for in a driver in terms of speed and commitment.”

Slade expects that Jones’ family-run operation will be a similar environment to Stone Brothers Racing, where he enjoyed the best years of his V8 career to date.

The South Australian finished fifth in the 2012 championship with SBR in a season that included a pole position at Sydney Olympic Park.

“I think the Freightliner Racing team will suit me, originally being a country boy from Adelaide, and also having experience with a family team background; working with the guys from SBR,” he said.

“I’m looking forward to being back in that family team environment again.

“The team have been one of the benchmark teams since the introduction of the car of the future and have had some really strong race results, which I want to continue for them in 2016.”