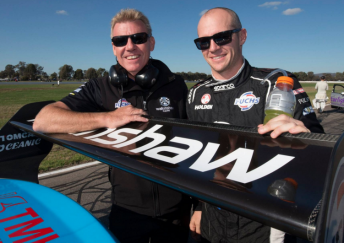 Charlie Schwerkolt has confirmed the structure that his new single-car team will take for next year’s V8 Supercars Championship.

As previously reported, Schwerkolt will run a Triple Eight-supplied car out of Melbourne, led by experienced team manager Jeff Grech.

The move comes after just a single season for Schwerkolt and driver Lee Holdsworth at Walkinshaw Racing, which is scaling back from four cars to two for 2016.

“I’ve done a deal with Roland and bought a Triple Eight car that is running out there at the moment,” Schwerkolt confirmed to Inside Supercars.

“We’re putting a team together like Tekno, basically, a satellite operation to Triple Eight.

“It’ll be based in Melbourne and there is lots to put together. I’ve employed Jeff Grech to be my team manager and run the operation.

“That’s really exciting. He’s been in the sport for a long, long time. He’s had a five-year break or so and he’s excited to be back because it’s his passion.

“He’ll put on some really good people and pull it all together for me.”

Schwerkolt noted that finding quality staff will be the key to making the structure work, but stressed it’ll follow Tekno’s model of a minimal head count.

“They do it well and Shane (van Gisbergen) has been up there all the time,” he said of Tekno

Also speaking on the program, Holdsworth said that he’s excited by the way that the team is coming together.

“I feel like we’re in this together doing a little business venture,” he said.

“We’re getting some good guys. Charlie is very good with picking the right people and Jeff has been amazing.

“It’s all come about so quickly and without Jeff I don’t think it would have been done so smoothly.

“Charlie and I both haven’t been in the best situation for the last three years. I certainly didn’t want to end up as a fourth car.

“Now I’m just looking forward to being the focus again in the team and the priority.

“When things are a drama we can get on top of them ourselves and take control. It’s going to be really good for us.”