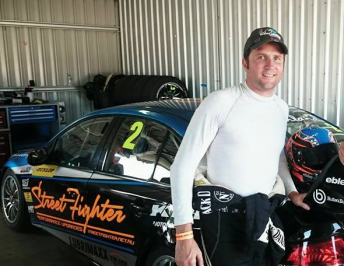 Owen Kelly is working on a return to the Dunlop Series next season as he looks to secure a V8 Supercars Pirtek Enduro Cup drive.

The 38-year-old is eager to rejoin the V8 Supercars paddock following a spell in America where he competed in selective races in the NASCAR Sprint Cup and second tier Nationwide now Xfinity Series.

While keen to continue his career in America, Kelly is hoping to re-establish himself on the V8 enduro co-driver market in 2016.

In order to boost his value, the Tasmanian is working towards a program to contest the full 2016 Dunlop Series season with Terry Wyhoon’s Image Racing.

Kelly made his Development Series debut in 2001 recording an overall championship best finish of fourth, which provided the platform to graduate to the main game as an enduro driver.

Regular appearances in the shared driver races until the end of 2012 followed, with his last drive alongside Greg Murphy at Kelly Racing.

Last week he drove a V8 Supercar for the first time since Bathurst 2012 when he briefly piloted an Image Racing Falcon as part of a driver coaching day at Winton last week.

“Terry (Wyhoon) is keen for me to drive one of the cars next year all the time and if I can tie that into a good enduro deal then I’m keen to do it for sure,” Kelly told Speedcafe.com.

“There is every chance it could happen. I don’t have a enduro gig locked in as of yet so I am working on that.

“I’m not looking at the Dunlop Series as something you can make a career out of but it does keep you sharp for the enduro races.

“I feel have got plenty of years left in me as an enduro driver. I have 13 Bathurst 1000s under my belt so it will be a shame to waste the experience.”

Yet to lock in any drives for 2016, Kelly has started to make contact with V8 Supercars teams regarding enduro drives.

He is also hopeful of securing a deal to compete in NASCAR road course events which could fit around a potential Dunlop Series and V8 enduro schedule.

“I haven’t spoken to everyone but I have spoken to a few teams to see what is going on out there,” added Kelly.

“Hopefully there is still some seats out there that people are looking to put experienced guys in. If you are driving in the Dunlop Series as well you are ticking a few boxes there.

“It would be great to drive Terry’s car and do those race in America. It would be a good little program.”

Image Racing has meanwhile confirmed that Tekno Autosports owner Jonathon Webb will drive its #10 Ford in the Sydney season finale next month.

Jesse Dixon campaigned the car for the bulk of the season before a lack of funds saw Grant Denyer take over at Bathurst.