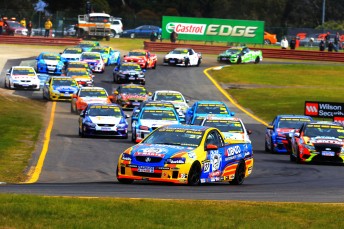 The V8 Ute Racing Series will continue with its current Ford Falcon and Holden Commodore-based equipment until at least the end of 2017 following delays developing its new platform.

Originally the category had planned to introduce new generation SUV-based Utes in 2016 as a replacement for the Ford and Holden vehicles which have formed the base for the series since its inception.

After striking an alliance with V8 Supercars earlier this year, a prototype of the new generation Ute was hoped to be ready by August.

The initial concept of a purpose-built chassis with SUV utility bodies and V8 engines, however, met considerable resistance, halting progress at the design stage. 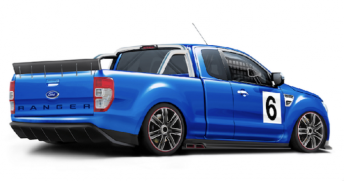 SUV-based utes won’t be seen until at least 2018

A new two-year Category Management Agreement between the Australian V8 Ute Racing Company and CAMS now stipulates that the current vehicles will remain across the 2016 and 2017 seasons.

An option for a further three-year deal from 2018 onwards has also been tabled which will see V8 Utes hold the exclusive rights to run a new SUV Ute platform, which must be production based.

“We will run the existing platform for another two years and during that time we hope to develop a new SUV platform to launch in 2018,” category manager Bill West told Speedcafe.com.

“It is no secret that we didn’t have an agreement between V8 Supercars, CAMS and Utes as to what that platform should look like.

“It is now down to CAMS and V8 Utes to agree on a format. We have done some preliminary designs that is as far as we have got.

“It still doesn’t have technical specifications confirmed so there is a lot of water to go under the bridge (before we see a new generation Ute).”

Meanwhile, the category has released a modified eight round 2016 calendar featuring visits to Symmons Plains, Phillip Island and Winton.

Adelaide’s Clipsal 500 in March will act as the season opener before the series heads to Tasmania’s Symmons Plains, with April’s visit to Phillip Island ending the circuit’s six year hiatus from the Utes schedule.

Winton will host the fourth round before further events at Townsville, Bathurst and the Gold Coast.

The location and date for the final round are yet to be disclosed with the category evaluating several options including the possibility of an overseas meeting.