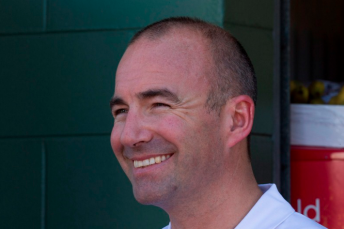 Marcos Ambrose has thrown his support behind a new karting academy aimed at helping young Tasmanians progress through the sport.

Walter’s two sons Sam and Ben both have strong karting resumes, with the latter adding to his collection of state titles last weekend in Launceston.

The AWC Motorsport Academy will contest rounds of next year’s Australian Kart Championship with a yet-to-be named line-up of young Tasmanian talent.

Ambrose is himself a former Australian karting champion, taking out the Clubman Heavy title in 1995 before moving into Formula Ford the following year.

He also had a brief involvement in a karting project during his time in the United States, selling engines under the Marcos Ambrose Motorsport banner. Ambrose on the way to the 1995 Clubman Heavy title

Now living back in Launceston, the latest project offers the 39-year-old an opportunity to help youngsters follow in his footsteps.

“I’m stoked to partner with the AWC Motorsport Academy and help these kids achieve their goals,” he said in a statement.

“I look forward to being able to pass on some of my knowledge to the drivers.”

Ambrose currently has no racing commitments of his own next year after electing against continuing as a V8 Supercars co-driver.

The two-time V8 Supercars champion was absent from the weekend’s Phillip Island event, marking the first V8 meeting he has missed since returning to Australia last December.

He instead attended the state titles in Launceston, helping spot talent for the AWC drives.

“Marcos has been away from the scene in Tassie for a while so it was great to get a fresh set of eyes on the talent that’s out there,” explained AWC Motorsport director Jonhathan Males.

“Now that he’s finished his driving career he’s hoping to put a bit back, so he’s working with us as a mentor.

“He’s got a lot of knowledge that he can impart on the youth.”

In addition to tutelage from Ambrose, the AWC drivers will benefit from the guidance of karting ace James Sera, who is providing logistics, kart preparation and mentoring for the project.

Tasmanian engine tuner Zane Wyatt is set to provide technical support to the team, which will run as many as seven karts across four classes.