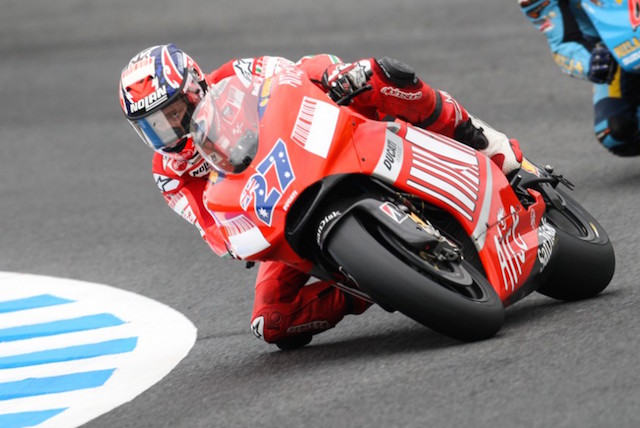 Stoner will undertake a number of tests with Ducati next season following his split with Honda.

The 30-year-old won his maiden title with Ducati in 2007 which was the start of a four-year association with the Italian manufacturer that netted a total of 23 wins.

Stoner then moved to Honda, winning the 2011 MotoGP before retiring in 2012 ahead of making a failed bid in the V8 Supercars Dunlop Series in 2013 in a Triple Eight-prepared Commodore.

After coming out of retirement Stoner competed in the Suzuka 8 Hours with Honda in July only to suffer a broken shoulder and leg in a nasty crash that was caused by a mechanical fault.

“It’s been a great journey with HRC over the last five years, winning the World Championship in 2011 was obviously a high point and I’ve made many friends and formed lasting relationships along the way,” Stoner said in a statement.

“For 2016 I am very excited to announce that I will again be joining the Ducati team.

“I have so many great memories working with the people and the brand of Ducati and the opportunity to work with them again is something very special.

“Gigi Dall’Igna has brought with him a new approach and I’m looking forward to assisting the team, Andrea Dovizioso and Andrea Iannone however I can.”

Ducati chief executive Claudio Domenicali said Stoner’s return would be an important contribution to the team.

“Stoner has always remained in the hearts of all the Ducatisti and I am really pleased that he has decided to come back to our family,” Domenicali said.

“Casey has an extraordinary talent and with his experience he will be able to make an important contribution for Gigi and the two Andreas in the development of the Desmosedici MotoGP bike.”