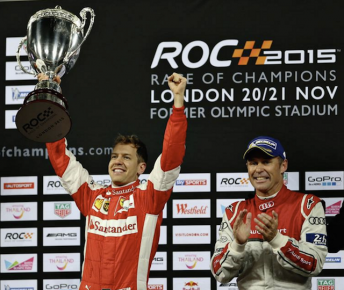 “Of course I’m very happy and honoured to win – but that took a while,” Vettel said.

“A lot of world class racing drivers have won this trophy. I’ve tried to win this many times and failed many times but finally I’ve succeeded.”

Vettel progressed to the final by beating the defending ROC winner David Coulthard in the semi-final 2-1 while Kristensen blitzed Alex Buncombe 2-0 in the other semi.

The pair prevailed over Team Germany’s Vettel and Nico Hulkenberg.

Team Australia’s campaign was thwarted by Germany with Mick Doohan Daniel Ricciardo losing 2-0 to Vettel and Hulkenberg in the quarter-final.

In the head-to-head section of the competition Ricciardo bowed out to Hulkenberg in the first stage. 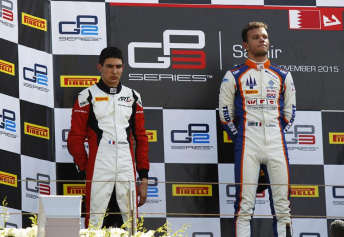 In the final 15-lap heat Luca Ghiotto chalked up win number five for the year, setting-up a cliffhanger finish to the season in Abu Dhabi this weekend.

The win gave Ghiotto a two-point lead over Ocon going into the series decider.