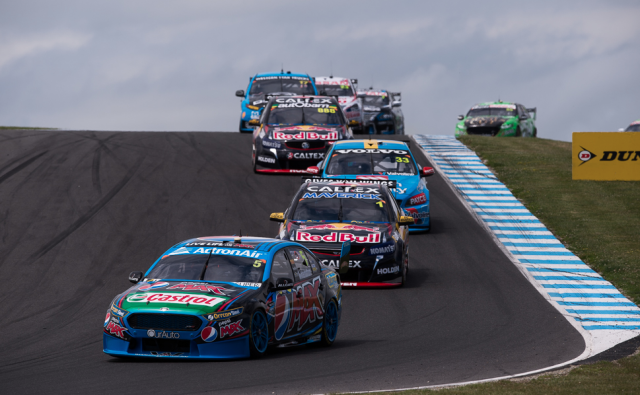 Prodrive boss Tim Edwards is hopeful of a clean V8 Supercars title decider in Sydney after a weekend at Phillip Island that brought mind games and team tactics to the forefront.

Edwards saw one of his two championship combatants, David Reynolds, bow out of the battle after being unceremoniously dealt with by Holden front-runner Shane van Gisbergen in Race 31.

The incident came after multiple Holden drivers and teams had publicly stated they would ‘help’ Craig Lowndes in his attempts to chase down Reynolds and points leader Mark Winterbottom.

Winterbottom lamented what he described as the ‘team tactics’ on Saturday before cooly shrugging off Jamie Whincup’s last lap dive for third in yesterday’s feature race as ‘a good move’.

Many in the paddock at the weekend felt the punishment was lenient considering its implications for Reynolds.

With Lowndes having now closed to within 179 points of Winterbottom, contact from a rival on the unforgiving streets of Sydney could be all it takes to erase the vast majority of the remaining deficit.

“You’d like to hope it will be a fair fight to the end,” Edwards told Speedcafe.com when asked whether he fears Sydney will see a further escalation of the weekend’s drama.

“I don’t think anybody wants to see any bad sportsmanship impacting the championship. Let’s just hope it pans out like that.”

Holden Motorsport manager Simon McNamara stressed on Sunday that the Commodore runners ‘drive as a family’ but denied that any would act in an unsportsmanlike way.

McNamara himself had brief words with Winterbottom after the Ford star’s seventh place finish in the controversial Race 31, noting to the driver that it had been ‘a good race’.

“We’re not playing any mind games, but if they choose to play it that way, so be it,” said Edwards of the off-track barbs, more of which are likely to emerge through the media in the Sydney build-up.

“Frosty would just rather lock himself away, not talk to anybody and then hop in the car, score pole and win the race.

“We’ll minimise some of his (sponsor and media) activities in Sydney, but unfortunately I can’t shield him from people walking up and making smart arse comments.

“He was fine (with the McNamara conversation), but was obviously pissed off after that race (where he’d been shuffled from fifth to eighth on the opening lap).

“It’s a difficult position for him because when you’re racing with people that have nothing to lose, it’s very hard.”

Despite scoring pole on Sunday, Winterbottom and Prodrive were comprehensively out-paced in all three races by the two Red Bull Holdens and Scott McLaughlin’s Volvo.

Whether Prodrive can halt Red Bull’s recent superiority and have Winterbottom win the title from the front in Sydney remains to be seen.

“It’s hard to gauge,” said Edwards of how the team’s cars will suit the street circuit.

“When we came here (to Phillip Island), people were speculating that the FG X aero that everybody waffles on about would have seen us pretty superior. It didn’t pan out that way.

“Frosty has got to finish an average of 12th in Sydney to wrap it up and I’m quite confident our car is capable of that.

“But as we know there are a million things other than car speed that can impact our result there.”

The December 4-6 Sydney meeting will see two 125km heats each awarding 75 points for the win on the Saturday before a 250km, 150 point Sunday finale.