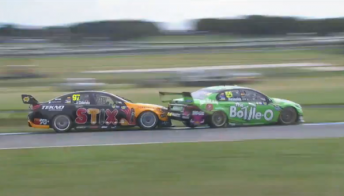 Shane van Gisbergen’s tangle with David Reynolds in Race 31 and subsequent 25 point penalty proved the most controversial topic of the weekend at Phillip Island.

Reynolds was pushed off the track at high-speed by the Kiwi, dropping The Bottle-O Ford to last in the race and ending any realistic hopes the 30-year-old had of the title.

Investigating Officer Jason Bargwanna waited until after the race to analyse the incident, eventually finding Van Gisbergen guilty of ‘careless driving’ and applying a 25 point penalty.

Prodrive, however, continues to argue that the standard 25 point penalty was not in line with the consequences for Reynolds, who effectively lost 45 points by spinning from fourth to 25th.

The tangle raised the wider debate about whether title contenders should be better ‘protected’ in the final rounds, with harsher sanctions applied in such circumstances.

Also of note was that a mid-race drive-through to Van Gisbergen would have resulted in a similar 45 point loss for the Tekno driver in such a short sprint.

What do you think? Was 25 points a fair punishment for Van Gisbergen’s actions? Cast your vote on this week’s Pirtek Poll.