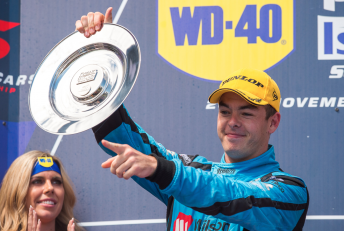 McLaughlin, who has not won since Phillip Island last year, joined Red Bull Holden drivers Craig Lowndes and Jamie Whincup in locking out the podium in all three of the weekend’s races.

Scoring a third and a second on Saturday, McLaughlin appeared on course to break the drought as he led throughout the middle stint in yesterday’s 200km encounter.

The Volvo however emerged from its second stop only metres ahead of a fast-closing Lowndes, who swept by to take the lead from the Kiwi at Turn 1.

While McLaughlin never truly threatened Lowndes over the closing stages, the 22-year-old believes his car was good enough to hold his rival at bay had he been able to keep the track position.

That left the Volvo team to rue a small delay, calculated by the team as lasting 1.3 seconds, in the second stop while McLaughlin had to wait for Garth Tander to file past and into his own pit box further up the lane.

As garage positions are determined by the proceeding year’s teams’ championship, McLaughlin and Volvo will continue to face the strategic disadvantage next year.

The Garry Rogers-owned squad is currently seventh of the 10 two-car outfits due to the combined points of McLaughlin and team-mate David Wall.

“Unfortunately just being down the back end of pit lane is quite hard,” said McLaughlin.

“Obviously you come in with the lead and if you’ve got a fair enough gap on a few guys when they pit on the same lap they can kind of bog you down.

“Definitely I had to wait there for a while, not long but enough to just lose maybe 50 metres on the race track.

“That’s probably what got Lowndesy in front of me. He was fast as well, he pulled away from me, but I felt like if I could have just been in front I might have held him off.”

Buoyed by a strong start that had seen him ahead of Lowndes throughout the opening stint, McLaughlin said he thoroughly enjoyed his battle with the 41-year-old veteran.

“I really enjoy this track because it’s physical,” he said.

“You’ve got to really put everything on the line each lap and if you make one mistake it can ruin your whole lap because you push wide and you’ve got to get off the throttle and it can ruin all your flow.

“It was very hard to concentrate and you’re sort of hitting the same marks as Lowndesy is and if he makes a mistake you’re like, ‘oh, here we go, I’ll have another crack here,’ or try and get close to him.

“It’s an awesome track and those are the races that really teach me, as a young driver coming up, it’s good to race these guys and learn how to hold my own.”

McLaughlin has scored three poles and four podiums across the last three events as part of Volvo’s resurgence in the second half of the season.

Next Story POLL: Did Van Gisbergen receive a fair penalty?