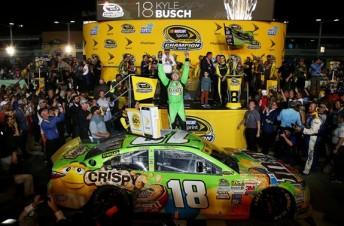 Kyle Busch not only beat home the other three drivers competing for the NASCAR championship, he also took the race win to secure his first title in style at Homestead-Miami Speedway.

Busch, who missed the first 11 races of the season after a breaking his leg in an Xfinity Series race at Daytona in February, not only climbed into title contention midway through the year, he also kept things together throughout the Chase and was the class of the field in the race that mattered.

Busch, seemingly on his way to a second-place finish that would have still secured the championship, took the lead from Brad Keselowski on a late re-start and pulled away from fellow Chase contender Kevin Harvick to win the series’ biggest prize.

Gordon, making his final appearance as a full-time driver in NASCAR’s Sprint Cup Series, finished sixth while Truex was 12th.

Busch’s season was far from straight-forward, but his form after his return in late May was nothing short of outstanding. NASCAR stated that Busch would be eligible for the Chase if he took a race win and finished inside the top-30 in points after 26 races.

It took Busch just over a month to find Victory Lane at Sonoma Raceway. That started a stretch of four wins in five races for the 30-year-old, including three straight wins at Kentucky Speedway, New Hampshire Motor Speedway and Indianapolis Motor Speedway.

Despite an early setback early in the Chase, Busch and his Joe Gibbs Racing team soon got into the groove, including three top-five finishes to advance to the Championship 4 at the final round.

Next Story Kyle Busch to undergo more surgery next month