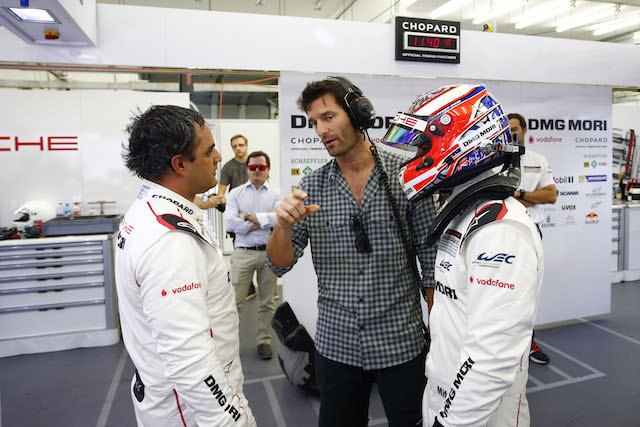 Evans, fresh from his second GP2 Series success of the season at the Sakhir circuit, completed a race evaluation over 54 laps with his best time of 1:43.6s, under two seconds away from Porsche LMP1 driver Neel Jani’s best race lap.

Montoya saw a best of 1:44.4s in race trim however turned an impressive 1:40.8s in qualifying mode, just over a second slower from the pole lap put in by Bernhard a few days ago.

It was the second time Porsche has called in former GP3 Series champ Evans to test the 919 after he tried out the 2 litre, four cylinder machine at Catalunya two weeks ago.

“It’s great to be back in the Porsche 919 Hybrid and to enjoy this level of technology,” Evans said.

“The car is really great to drive and it’s easy to get confidence in it.

“I’m learning little things here and there every lap. The car benefits a lot from the four-wheel drive under braking and obviously acceleration.

“The 919 has got a lot of downforce and the way it looks after its tyres is a lot better than in a GP2 car.”

Montoya was in raptures by what he described as the ‘most advanced race car on the planet.’

“The car is amazing, it is currently the most advanced race car on the planet and it is a hell of a toy,” Montoya beamed.

“Beforehand it was a bit shocking when I was given a 30-page manual of how to operate the car, but then it wasn’t that difficult.”

Porsche LMP1 team boss Andreas Seidl was impressed by the job the two drivers did during the day-long session.

“Mitch had the experience of the Barcelona test under his belt. Juan Pablo only had a simulator session before and drove the car for the first time,” Seidl said.

“We are very interested in drivers’ impressions, especially if it comes to a driver like Juan Pablo who has successfully driven so many different kinds of race cars in his career.

“Both were quickly up to speed and did a good job.”