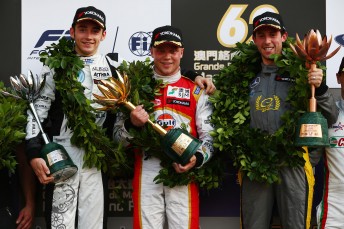 Felix Rosenqvist successfully defended his Macau Grand Prix title becoming only the second driver to do so since the Formula 3 format was introduced.

The Swede was made to work hard for the victory after losing the lead to Charles Leclerc who pulled off a stunning move around the outside of Rosenqvist at Lisboa.

Moments later a mistake at the final corner handed the lead back to Rosenqvist.

However, Leclerc repeated the move to regain the lead although his hopes of opening up a lead were dashed when the race was red flagged, following a multiple car crash, involving Gustavo Menezes, Yu Kanamara, Mitsunori Takaboshi and Ryan Tveter.

Leclerc led on the restart but was unable to stop Rosenqvist and Sam McLeod from overtaking.

Once ahead Rosenqvist marched to the chequered flag to follow in the footsteps of fellow back-to-back Macau GP winner Edoardo Mortara.

“It feels even better to win it the second time,” said Rosenqvist, who also won the qualification race from Leclerc and Sims.

In the beginning of the race I felt confident with the car, so even though Charles got ahead of me on the first lap I was sure I could get him back.” 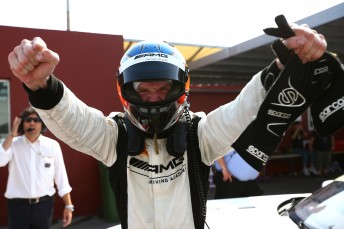 Maro Engel became the inaugural winner of the FIA GT World Cup after coming through a shortened race on the Macau streets.

The Mercedes SLS GT3 driver initially lost out at the start to the Audi of Edoardo Mortara but Engel fought back to regain the lead on the run down to Lisboa.

Once ahead Engel opened up an eight second lead before the Safety Car was deployed on lap 14         when Vutthikorn Inthraphuvasak crashed heavily at Paiol.

The race was called just moments later when following a multiple car pile up triggered by John Shen under caution.

As a result, Engel received the honour of becoming the first GT World Cup champion.

The former V8 Supercar driver inherited the victory in the earlier qualification race after on the road winner Stefan Mucke was disqualified for a Safety Car restart infringement.

“I made a big mistake in qualifying and I thought right there standing by the wall that my weekend might be over and I’d blown the opportunity we had.

“To win this race today is amazing. I just love this place, I love this track.”

Rene Rast managed to come through to claim second for Audi with Mortara third in the Team Phoenix Audi R8.

However, Mortara was later judged to have jumped the start and handed a 20 second penalty which dropped him down to sixth.

Craft Bamboo Aston Martin’s Mucke was promoted to third ahead of the factory Mercedes of Renger Van Der Zande.

Victory for Comini in Race 2 helped him secure the TCR International Series title.

Next Story Dixon to drive 1906 Darracq at Leadfoot Festival