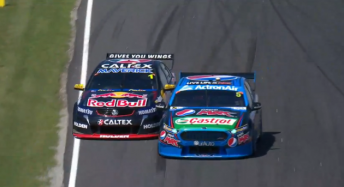 Whincup dives down the inside as Winterbottom covers. pic: V8TV

Whincup took third from Winterbottom at MG Corner on the last lap, forcing his way down the inside as the Ford driver attempted to defend the place.

Winterbottom’s block saw Whincup forced to complete the pass with all four wheels off-track, while low-speed contact also resulted at the apex. 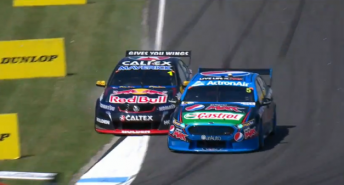 Investigating Officer Jason Bargwanna looked into the incident post-race before declaring that no breach of the rules had been established.

Whincup’s efforts allowed team-mate Craig Lowndes to claw another nine points from Winterbottom’s championship lead, reducing the margin to 179 with one event to go.

“Jamie had a crack and I moved across, it was a good move,” shrugged Winterbottom. 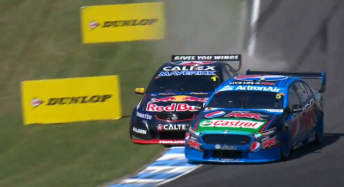 “We had contact but that is racing. I don’t think pushing someone off the track is racing but I’m cool with that move.

“We will just keep fighting on.”

Whincup had closed rapidly on his rival throughout the final stint before pouncing.

“Over the years I’ve been racing the last few rounds and everyone is gung-ho, so it was my opportunity to do the same thing,” he explained. 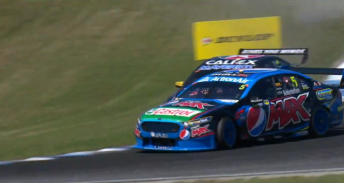 “It was ‘all out’. I saw the opportunity down the inside and ‘happy days’.

“I figured there’s a good chance he’s going to win the war so I may as well try and win the battle.”

The six-time champion quickly deflected any suggestion that he had been overtly aggressive due to the championship situation.

“No one paid $50 to come in today to see cars circulating or people helping each other out. We were there to race.

“It was a big opportunity to get a podium and podiums are huge in our sport so I gave it absolutely everything. It was a fair move down the inside.”

Whincup had overtaken Lowndes off the start, but was given the ‘least-preferred’ pit strategy due to his team-mate’s championship fight.

Pitting at the end of the opening lap buried Whincup down the order and made the 45 laps hard going.

“We ran the whole race on full fuel which around here is like lugging someone in the boot,” he said.

“By the end it was a level playing field with everyone else and the car was good.”

Although Winterbottom had earlier charged to his first pole in 25 races, the afternoon proved that Prodrive still has work to do to catch back up to the Red Bull Holdens on race pace.

“I drove as hard as I could today,” concluded Winterbottom.

“I walk away proud and I still feel confident.

“Finishing fourth is not as good as we expect from the team after this year but when you’re not quick enough you have to do what you can do.”