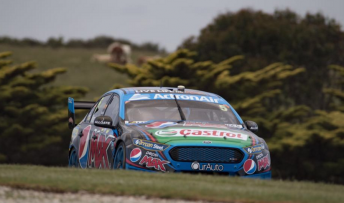 V8 Supercars Championship leader Mark Winterbottom hit back at critics by ending his pole position drought in emphatic fashion ahead of Race 33 at Phillip Island.

Winterbottom’s first pole in 25 races comes as the Ford star attempts to fend off the charging Craig Lowndes and score a maiden championship for himself and Prodrive.

Jamie Whincup led the way for the majority of the qualifying session only for Red Bull team-mate Lowndes to eclipse him with just under a minute remaining.

Winterbottom then immediately displaced his title rival at the top with a 1:30.68s lap that would not be beaten.

Lowndes’ time was 0.2s adrift, while Whincup improved his own benchmark on his last lap but could not lift himself out of third.

Whincup had been forced to abort the first lap on his second green tyre run when he ran wide at Turn 1, upsetting his rhythm.

“It’s awesome to come back, I’ve been copping so much crap from people,” beamed Winterbottom.

“When you have got a quick car you can drive it when you don’t you have to fight your battles. It’s the best grand ($1,000 Armor All Pole Award) I have ever won.”

Scott McLaughlin put in two fast laps on his second run, moving to fifth before jumping ahead of Scott Pye into fourth.

The Nissans of Michael Causo and Rick Kelly were sixth and seventh respectively ahead of David Reynolds, Shane van Gisbergen and Todd Kelly.

Dale Wood managed an impressive 12th after an engine change in his Brad Jones Racing Holden this morning, edging out the second Pepsi Max Ford of Cameron Waters.

It was a tough session for the Holden Racing Team, with Garth Tander 15th and practice pace-setter James Courtney 17th.