Title contenders set for ‘biggest day of the year’ 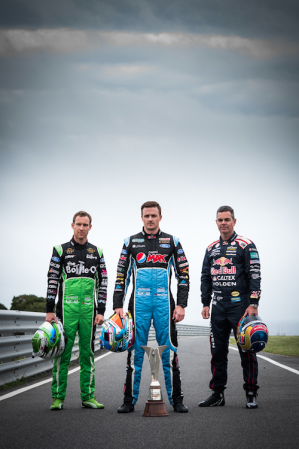 Reynolds, Winterbottom and Lowndes pose with the championship trophy

Outgoing V8 Supercars champion Jamie Whincup has labelled it the ‘biggest day of the year’ for the title contenders as they set the stage for next month’s season finale.

The 200km Phillip Island feature carries 150 points for the winner and will determine how many remain in contention heading into the Coates Hire Sydney 500.

The fateful Pukekohe sprint where Lowndes was hit by a tyre failure while leading remains the only time Winterbottom has finished ahead of his Holden rival since Sandown in September.

The under siege Ford driver said in the lead-up to Phillip Island that his experience heading the standings into the final stage of the season has left him with renewed respect for Whincup.

“I’m sure every minute of the day he’s thinking about the championship, so I think he’s doing a good job.

“He’s backed it off a bit trying to score as many points as he can and just hang on until the end.

“The last thing he wants to do is make an error himself and drop a heap of points.

“At the same time it can be dangerous doing that as well, because sometimes the best form of defence is attack.

“(But) he’s worked out his strategy, what he feels is best for him, and he doesn’t care if he wins by one point or 300 points, he just wants to get there at the end, no different to Lowndesy.

“It’s absolutely anyone’s game… I think tomorrow is the biggest day of the championship.”

Winterbottom took a fourth and a seventh from Saturday’s two sprints while the Red Bull entries of Whincup and Lowndes scored a win and two podiums apiece.

Even if Winterbottom wins today’s race, Lowndes need only finish inside the top 15 to remain in mathematical contention heading to Sydney.

A repeat of Saturday’s opening race results would, however, see the gap shrink to 155, leaving Lowndes well and truly in contention for Sydney.

“We’ll work on it, get it a bit better and hopefully come out (today) with a good car.”

Saturday’s action – most notably Shane van Gisbergen’s treatment of Reynolds – raised claims of ‘manufacturer tactics’ in the title fight, with Winterbottom certain that other Holden drivers are deliberately interfering in the battle.

“That is what they are willing to do to win it,” he said after Race 31. “We are trying to win it too but there has got to be sportsmanship in victories.”

Lowndes however laughed off suggestions that the incident had been to help his cause.

“I don’t think Gizzy does a lot of favours for anyone,” he smiled.

“(The Holden Racing Team’s) James Courtney said on TV last week that he’s going to try and help us win the championship, but you can’t rely on that.