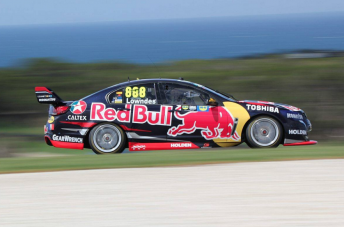 Craig Lowndes continued to chip away at Mark Winterbottom’s V8 Supercars Championship lead with victory in Race 33 at Phillip Island.

Lowndes led home Scott McLaughlin after overcoming a poor start in the 200km race, while Jamie Whincup took the final podium spot from Mark Winterbottom with a bold move on the final lap.

Whincup’s dive-bomb at MG Corner saw the two cars make minor contact at the apex, with the Holden driver having put two wheels in the grass under brakes as he fought to make a gap.

Winterbottom had enjoyed the best of the starts to show the way early from McLaughlin, Whincup and Lowndes, who lost ground with a slow getaway from the outside of the front-row.

Whincup made the first of his two stops on the opening lap and, unable to match the pace of his team-mate in the first two stints, did not figure in the top three again until the final corners.

Winterbottom lost the lead to McLaughlin in the first round of stops, before also dropping behind Lowndes in the second pit cycle.

McLaughlin rejoined from his own final stop narrowly ahead of Lowndes with 23 of the 45 laps to go, but could not hold the charging Red Bull Commodore at bay on the run to Turn 1.

Lowndes eased away to win by 2s, ensuring McLaughlin and Volvo again failed to break their year-long victory drought.

Whincup and Winterbottom were a full 12s away from the lead at the flag, with the latter left to shrug off the late loss of potentially important points.

Todd and Rick Kelly ended up fifth and sixth respectively on a day where the Nissan Altimas proved highly competitive.

Michael Caruso appeared set to beat the two team co-owners before a drive-through for spinning wheels in his second stop resigned him to a lowly 22nd place finish.

Shane van Gisbergen led home the third of the Nissans, James Moffat, in seventh while Garth Tander and David Reynolds completed the top 10.

The opening lap had proved the most hectic of the weekend, with several separate incidents unfolding.

Lee Holdsworth was taken out in a multi-car melee at Turn 2 that also saw Dale Wood’s Holden damaged and James Courtney delayed.

Cameron Waters then suffered a flat-tyre from a wild battle at the Hayshed with Rick Kelly, who did well to save his Nissan after a bump while on the outisde of the Ford through the corner.

Jason Bright narrowly escaped the drama but saw his race unravel a short time later when he was released into the path of Scott Pye in pitlane, netting a drive-through penalty.

Pye likewise survived that hit but made a mistake of his own at Lukey Heights early in his second stint, costing any chance of a top six finish.