Australian Ryan Briscoe has been named as part of Ford’s driver roster for the 2016 IMSA SportsCar Championship.

The 34-year-old was expected to join the Chip Ganassi Ford outfit after Corvette omitted him from their line up announcement.

Chip Ganassi Racing has also confirmed that Briscoe will partner former Porsche ace Westbrook, while Muller and Hand will team up in the other Ford GT entry. 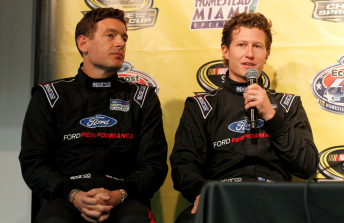 “It’s just such a huge honor and to echo what these guys said it’s a massive deal,” said Briscoe a former Chip Ganassi IndyCar driver.

“I’m so proud to be a part of the program. I’ve got a lot of familiar faces at Chip Ganassi Racing. It really is like family.

“We’ve known each other for 10 years now, so Chip’s a great man. He runs an unbelievable race team and it’s a huge honor to be a part of.

“It’s great to be a part of Ford now and going racing next year at Le Mans is gonna be huge.”

Ganassi is yet to disclose the drivers who will join the team for the long distance races although Kiwi Scott Dixon and Sebastien Bourdais have been linked to the seats.