Disappointment for Pye after costly error 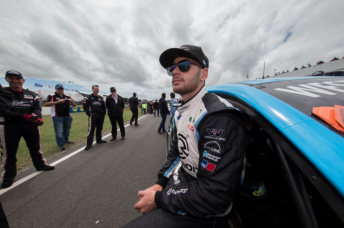 Scott Pye and DJR Team Penske were left to rue what might have been in Race 33 after an early off cost any chance of a strong finish.

Pye was running sixth early in the second stint when he locked the rear brakes of the Detroit-backed Ford on the approach to Lukey Heights.

Unseen by television cameras, the mistake saw Pye run off the road and drop as low as 19th place.

The DJRTP Falcon, which started fifth and had set the fastest lap of the race in the early going, eventually took the flag 14th.

“We had a great race car today, qualifying went well and I felt we could run with the lead pack,” reflected Pye.

“The race strategy was good and after I pitted on Lap 1, we had pretty clear track.

“But over Lukey Heights on about Lap 10, I just got out wide in the marbles and went off the road.

“It was so disappointing after such a good run this weekend.

“I felt for the boys but we just had to push on and try and get the best result we could.

“There was some consolation setting the fastest lap in the Detroit Falcon, but it does not make up for the race result.”

Pye had finished four of the previous five races inside the top eight, including a maiden podium for himself and the team last time out at Pukekohe.

The South Australian qualified eighth and sixth for Phillip Island’s Saturday sprints, taking finishes of 13th and sixth after losing ground when forced wide at Turn 1 in the opening heat.

Next Story Prodrive asks for 'fair fight' in Sydney decider