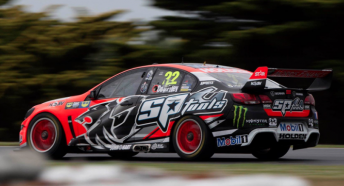 The Holden Racing Team driver surged to the top of the time sheets in the final two minutes of the 15 minute hit out held in overcast conditions at the Victorian circuit.

“Today is about not worrying over the position of our car, it is about trying to get a better direction and better feel,” said Courtney.

“Over the weekend I think we have learned some stuff. We don’t get paid for this morning so we have got to go and do it all again.”

Title contender Craig Lowndes had topped the times earlier in the session before ending up in fourth while Scott McLaughlin was fifth in front of championship leader Mark Winterbottom.

“It feels like we have made gains but with gains come losses so we have got to marry the two and try and go forward,” said Winterbottom.

“I feel good people are trying to make mew feel different to what I am but my head is in a good space. I know what is on the line and what we have got to do to win it (the championship).”