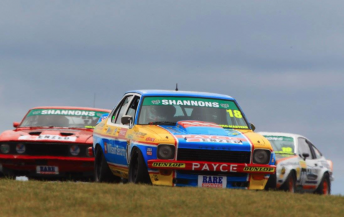 John Bowe is a four-time Enzed Touring Car Masters series winner after claiming the round win at the Phillip Island finale.

Steven Johnson, driving the Ford Mustang which Bowe started the season in, won the final race, but it was Bowe who took the overall Pro Masters class honours with a second place finish.

Johnson got the jump at the start before the race was neutralised with barely a lap run when Wayne Mercer and Graham Alexander came to grief at Lukey Heights.

However, Johnson got on the throttle early at the Lap 4 restart, putting nearly a second on Bowe, and the Tasmanian had more to worry about when Eddie Abelnica swept around him on the outside of Doohan Corner.

Bowe soon came under pressure from Andrew Miedecke, but survived that challenge and eventually reclaimed second from Abelnica.

Alone out front, Johnson broke the lap record as he pulled away to a 4.7s victory over the shortened eight-lap affair, ahead of Bowe and Abelnica.

Greg Ritter finished a race for the first time this weekend after two mechanical failures on Saturday, driving from the rear of grid to fourth after managing to pass Miedecke on the outside of Lukey Heights in the closing stages.

Bowe meanwhile reflected on another successful season which saw the Ford hero switch to a Gary O’Brien-owned Holden Torana midway through.

“We’ve had a terrific year,” he said.

“The Torana has exceeded my expectations and the guys that built it at Bendigo Retro Muscle Cars did an awesome job with it.

“It allowed me to give Stevie (Johnson) a go, because I felt he’d been hard done by in the V8 world. I’ve known him since he was a kid and I think he’s a fantastic driver so it was opportune to let him drive it.

Johnson also hailed the deal which he struck up with his long-time friend and mentor having been overlooked for a V8 Supercars endurance seat for the first time in his career.

“It’s been a pretty cool weekend and an awesome year,” said Johnson.

“It’s been something that’s given me the passion again. I’ve always loved the driving but the whole social aspect of this category is fantastic – and the fans love it.”

The Enzed Touring Car Masters returns in 2016 at Adelaide’s Clipsal 500 from March 3-6.