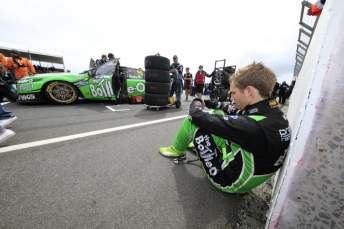 David Reynolds was escorted off the road at high speed during Saturday’s opening sprint after contact from the Tekno Holden.

The penalty was handed down last night following analysis of data and video from both cars, as well as interviews with the drivers.

Many in the paddock were left surprised by the seemingly lenient penalty, including Reynolds himself.

Speaking to V8TV‘s Greg Rust, Bargwanna explained that Reynolds should have given racing room to Van Gisbergen as the Holden drew up to the left-rear corner of his Ford.

Bargwanna added that Van Gisbergen did lift off the throttle during the contact, signifying intent to avoid the clash.

“One of the standards we set and maintain throughout the course of the year is that when there’s some overlap between race cars you do have to give racing room,” said Bargwanna.

“What I wanted to look at and make sure of exactly was who was where on the race track and what contributed to it.

“For me, ultimately the overlap was there because Shane gave Dave a little bit of a tickle-up on the way out of the corner.

“But you’ve still got to give a bit of room. Shane did try and get out of the throttle and he made the decision that I think I can get through there.

“Obviously it was the wrong decision, but he made an attempt to try and avoid the incident. By then it was all too late and Dave ended up spinning off.

“That’s where we ended up, we found that Shane was guilty of careless driving.”

Reynolds was left disappointed with the penalty after finishing last and seeing his chances of the title slim dramatically.

“I’m a bit disappointed, (because) the penalty doesn’t really fit the crime,” said Reynolds, who had run fourth before the spin.

“I lost 50 points when he turned me around because I went back to last and he copped a 25 point penalty. It’s not really justified.

“It just sucks that he turned me around because it kind of ruined my championship standings. It makes it really, really tough for me to win it.”

Bargwanna however stressed that championship positions have no bearing when investigating incidents.

“I like to deal with the facts and keep the emotion out of what we do,” he said.

“I understand it’s a very passionate sport and there’s a lot on the line for a lot of people.

“We deal with what we’re looking at. The crime, the penalty, we make it consistent throughout the year.”