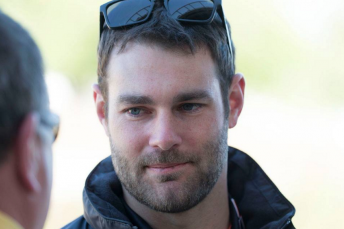 Shane van Gisbergen has been penalised 25 points following his controversial clash with David Reynolds in the opening Phillip Island sprint.

Reynolds was enraged after the Holden driver spun The Bottle-O Ford on the entry to the 220km/h Hayshed corner while battling for fourth on just the second lap.

Van Gisbergen had knocked Reynolds wide at Siberia before gaining a small overlap and subsequently pushing the championship contender off as he was squeezed for room.

The Tekno Autosports star confirmed the 25 point penalty via his social media account this evening.

“Tough day today,” he wrote. “Fought hard, stood my ground. Even if I got 25 points for it. Long race tomorrow look forward to giving it a go!!”

Reynolds had confronted Van Gisbergen post-race, saying “you’re dead to me bro” to the Kiwi as he left the Tekno transporter.

Van Gisbergen added tags #yourdeadtomebro and #thatsracism to his Facebook post, before deleting the latter reference and adding “Sorry bad joke.. Just the way it was said in our trailer”.