Reynolds to SVG: ‘You’re dead to me bro’

Reynolds to SVG: ‘You’re dead to me bro’ 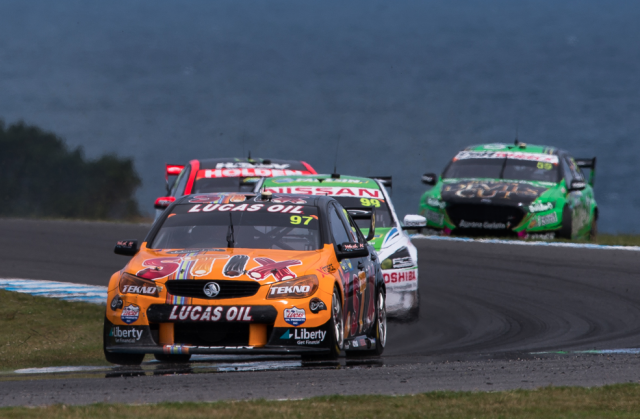 David Reynolds vented his frustration with Shane van Gisbergen after being turned around at 220km/h early in Race 31.

Reynolds spun out of fourth place on the second lap after Van Gisbergen gained a tiny overlap down the left-side of The Bottle-O Ford and refused to back out.

The incident and resulting 25th place finish has seemingly ended any hopes Reynolds had of taking out the championship.

Reynolds stormed into the Tekno Autosports truck post-race to confront the Kiwi, saying ‘you’re dead to me bro’ as he left the transporter.

“He was just drilling me two corners before and he drilled me at Siberia,” explained Reynolds.

“He must have got the tiniest little overlap and I just got turned around at high speed.

“The good drivers in the field can pass without crashing into you. I must have got a bad one beside me.”

The Prodrive team was left dumbfounded that Van Gisbergen was allowed to complete the 14 laps in fourth place, with officials electing to review the scenario post-race.

Van Gisbergen denied that he should be penalised for his actions, instead suggesting that Reynolds running him wide at Turn 1 should be reviewed.

“At Turn 1 I was beside him and I saw he’d seen me, but then he drove me straight off the road,” he said. “That was pretty average.”

The Kiwi however stressed that the opening lap contact was ‘a separate incident’ to what happened at the Hayshed.

“I gave him a little bit of a bump at Turn 6, probably a little too much, but then I was clearly beside him and he kept running me across the road,” he said.

“I was happy with that but then he ran me too far and I wasn’t going to back out of it.

“Championship-wise I know he is in a fight, I’m not in it, but that is not the point.

“I’m still worrying about my championship so I was pushing as hard as I could. I’m sorry to end his race like that but I wasn’t going to back out.”