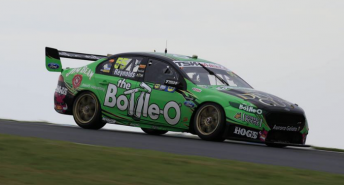 The Prodrive driver shot to the top of the timing screens in the dying seconds of the 15 minute hit out held in dry conditions at the Victorian circuit.

After Friday practice was plagued by wet weather the session provided teams with valuable dry track time prior to quaifying.

The session saw Paul Dumbrell drafted in to replace Lucas Dumbrell Motorsport’s Nick Percat who was forced to sit out the session due to his foot injury.

Dumbrell was black flagged during the session after failing to sign the entry forms in time for the start of Practice 3, such was the rush for him to deputise for Percat in the #22 LDM entry.

A quick visit to the pits saw him sign the papers while in the car before rejoining the session, where he finished in 24th spot.