Paul Dumbrell is a surprise last minute substitute at Lucas Dumbrell Motorsport for the remainder of the Phillip Island Super Sprint after Nick Percat was forced to withdraw.

Percat, who completed both practice sessions yesterday, was ruled out after his health took a turn for the worse this morning.

The former Bathurst winner spent a week in hospital prior to the event with a serious infection after his right foot was burnt during the Gold Coast 600.

While Karl Reindler had been on standby to take over the ride, team owner Lucas Dumbrell has selected his brother Paul as a surprise replacement.

“It just came down to opportunity,” Lucas Dumbrell told Speedcafe.com.

“Nick only decided about 30 minutes before practice this morning that he was out.

“When I told Simon McNamara (from Holden Motorsport), he’d just happened to have spoken to Paul and told me that he was here. I didn’t even know Paul was here today.

“All of his gear was in the Triple Eight truck because the team were returning it down to Melbourne. There was nothing pre-planned about it.

“Karl was our first choice, but it’s a really unique opportunity for Paul to drive for me that we wanted to take advantage of it.” 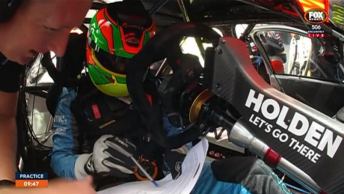 In a brief statement, the 2012 Bathurst winning driver added his excitement at teaming up with his brother.

“Obviously it’s disappointing for Nick to have injury rule him out, but it’s exciting for the Dumbrell brothers to unite and compete together,” Paul Dumbrell said.

“Lucas Dumbrell Motorsport has come a long way this season, so I can’t wait to get behind the wheel.”

Percat meanwhile says he’ll head back to hospital in Melbourne for further treatment.

“Only 45 minutes ago I was feeling ok,” he explained.

“The the lumps in my glands came back up. My temp went through the roof and I basically hit the deck in the A-trailer.

“I got the shakes and went straight to the medical centre.

“Fortunately my house-mate is on his way here and he will take me straight back to Knox Hospital. I’ll stay there tonight and possibly tomorrow night and get straight to the specialist for blood tests.

“It’s just weird as my foot feels fine, but my glands went ballistic and makes me feel like I want to throw up.”

Paul Dumbrell took to the track in the final practice session, completing eight laps to be 24th fastest.

Dumbrell had to return to the pits shortly after heading out on track in order to complete the driver sign-in process.