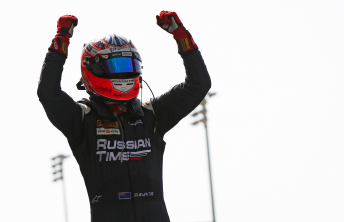 Mitch Evans claimed his second GP2 Series win of the season with an impressive come from behind drive at the penultimate round in Bahrain.

The New Zealander, starting from sixth, made the most of an accident at Turn 1 on the opening lap to surge to third behind pole-sitter Alex Lynn and Stoffel Vandoorne.

The race was briefly neutralised behind the Safety Car while circuit staff cleared the debris from the incident involving Nobuharu Matsushita and Rio Haryanto and a seperate crash for Oliver Rowland.

However, once racing resumed Evans held station in third before mounting an attack on Vandoorne.

After a series of attempts the Russian Time driver finally made a move stick leaving the path clear to reel in Lynn.

Evans surged onto the rear win of the DAMS driver before eventually taking the lead just after the halfway mark of the 23 lap race.

Once ahead he marched towards the chequered flag for his fourth GP2 victory, finishing in front of 2015 champion Vandoorne, who passed Lynn in the closing stages.

Evans’ win followed a third place finish in the feature race on Friday which was won by a dominant Vandoorne.

It proved to be an eventful race with the former GP3 champion as he battled for seventh in the early stages, before rising to sixth prior to his mandatory pit stop.

He re-emerged in second spot following the stop and escaped serious damage when Alexander Rossi made contact with the rear of his car.

In the end, he was unable to hold off a hard charging Matsushita, who snatched second on the penultimate lap to secure a one-two finish for ART Grand Prix.

Evans will swap his GP2 car for a Porsche 919 hybrid when he takes part in the FIA WEC LMP1 rookie test on Sunday in Bahrain.

Following the test Evans will rejoin the GP2 paddock for the finale at Abu Dhabi next weekend.