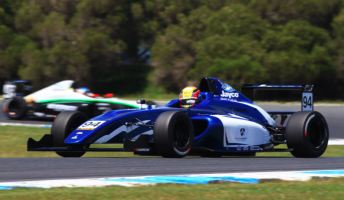 In a further boon for the long-time points leader, his nearest rival Thomas Randle, who swept the last event on the Gold Coast, ran off the track and finished a lowly ninth in Race 2.

As a result, Lloyd has opened up a 79 point lead in the championship standings.

Lloyd led the opener off pole while Randle quickly usurped Zane Goddard for second position, the latter two battling for a handful of laps before Tom Grech bought in.

Grech passed the third-placed Goddard on Lap 6 and set after Randle, while Lloyd disappeared up the road.

The AGI Sport driver had second position a lap later as it became clear that Randle was clearly struggling.

Goddard made a big lunge at the 2014 Australian Formula Ford series winner on Lap 9 but ran wide and dropped a position.

That allowed Will Brown to take up the slack, securing third position from Randle on Lap 11.

Brown and Randle were elevated to second and third respectively when Grech succumbed to a fuel surge problem two laps from home.

Goddard crossed the line in fourth but was demoted to sixth due to a five second penalty for jumping the start.

Jimmy Vernon had the prime starting position for the reverse top five Race 2 and held his nerve despite coming under attack from Randle early on.

Goddard necessitated the Safety Car when he backed his Team BRM machine into a marshal point on the second lap, having run wide at Doohan Corner while contesting fourth with Harry Hayek and Will Brown.

The fight for the lead resumed with the Lap 5 restart, both Vernon and Randle taking turns in the lead before Lloyd sensationally dived pass both in a three-wide move at the end of Gardner Straight on Lap 7.

The BRM driver never looked back, while Randle ran off two corners later and dropped to ninth, where he would remain.

Brown withstood late pressure from Luis Leeds to take third in a shortened affair, behind Lloyd and Vernon.

The penultimate round concludes with Race 3 tomorrow from 13:00 local time.