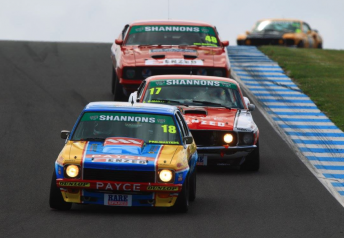 John Bowe leads the Enzed Touring Car Masters series for the first time this year with just one race remaining in the finale at Phillip Island.

Bowe overtook points leader Jim Richards by taking out Saturday’s two races, leading the opener from the second corner and the second contest from the very beginning.

Greg Ritter, on the other hand, was the hard luck story of the day with twin failures.

The debutant led the opener from pole position, but only as far as Southern Loop before his Chevrolet Monza’s gearbox failed.

That gave Bowe the lead and Steven Johnson second position, the latter having jumped from fifth to third at the start.

The race was neutralised on Lap 2 when Royston Evans dropped oil at Doohan Corner and parked his Pontiac Trans Am in the run-off.

Racing resumed four laps later, with Bowe, Johnson, and Eddie Abelnica pulling clear of the field, but a battle for the lead never developed as the race was called early.

Race 2 saw a repeat podium, Bowe maintaining a comfortable margin throughout as he lowered the lap record for the second consecutive race, while Johnson was kept honest by Abelnica for the duration.

Ritter meanwhile was busy scything his way from rear of grid to fourth position before breaking a throttle cable on the penultimate lap and again failing to finish.

Andrew Miedecke instead inherited the position from Tony Karanfilovski, who passed Jim Richards on the final lap.

Richards’ fourth and fifth in class across the two races sees Bowe lead the series by 16 points, with 60 on offer for the winner of tomorrow’s season closer from 12:30 local time.