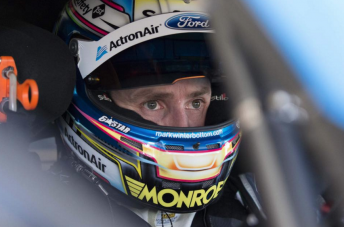 While the track had almost dried by the end of the day’s earlier session, further showers saw the second 60 minutes of running begin with the field on wets.

Winterbottom was one of several to move to slicks before more rain arrived just prior to the halfway mark.

With the track too damp for slicks but not fully wet, the majority of the field elected to pit and wait on the next weather development.

Winterbottom was one of several to spear off as the conditions worsened, escaping the gravel after a spin at Turn 2.

The early running also locked in the remainder of the top 10, with Practice 1 pace-setter Scott Pye second, 0.14s adrift of Winterbottom.

Jason Bright, David Reynolds and Craig Lowndes completed the top five, with the Red Bull Holden driver having survived a series of wild offs as he pushed the limits in the tricky conditions.

The conditions ensured that Scott Pye’s Practice 1 time of 1:32.06s remained the fastest of the day.