Steven Johnson has taken pole for the final round of the Touring Car Masters as Rusty French suffered a big hit in challenging conditions at Phillip Island. 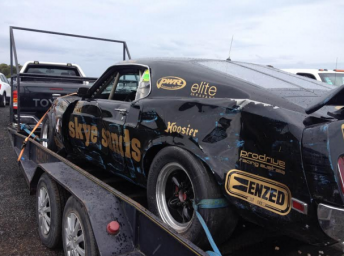 Both sides of the Mustang sustained damage

Johnson was one of only 12 drivers who managed to set a second timed lap before the French incident saw the session red flagged just beyond the five minute mark, with no running thereafter.

With the track still drying from earlier rain, the Prodrive co-owner lost control on the wet kerb at the exit of Turn 4, slid across the outfield and into the tyre wall, making heavy contact down both sides of his Mustang .

While the driver escaped unscathed, the tyre walls required extensive repairs, forcing a postponement of the following Formula 4 practice session.

John Bowe is now in the box seat to win the TCM series for a fourth time having qualified second on the grid, while points leader Jim Richards’ only lap placed him 17th. Richards leads the series by only five points.

Eddie Abelnica, Brett Youlden, and Greg Ritter rounded out the top five, the latter having set the pace by some margin in both rain-affected practice sessions on his series debut.

Of the other notables, Andrew Miedecke was ninth and Mark King 11th.

Young and James Duckworth will share the front-row of the grid at Phillip Island for the second year in succession after last year’s pole-sitter fell 0.0006s short of Young’s benchmark on his final lap.

Chris Stevenson and Adrian Flack start the opening race off the second row ahead of Harley Haber as the 16 year old revelled in the rain in just his third circuit racing round.

Adam Uebergang, Jon McCorkindale, Ben Walsh, series leader Brendon Pingel, and Blake Sciberras rounded out the top ten in a session which lost the best part of the first ten minutes when Brendon Tucker found the gravel at Siberia on his out lap.

Thomas Randle’s rich vein of form continued as he topped both practice sessions for the penultimate round of the CAMS Jayco Australian Formula 4 Championship.

The Dream Motorsport driver has now won the last six sessions, having qualified on pole and swept all three races on the Gold Coast.

Championship leader Jordan Lloyd was second-fastest on combined times, having spent time atop both sessions, with Will Brown third-fastest in the 10 car field.