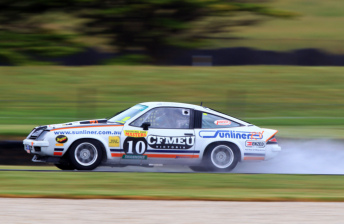 Greg Ritter will start his maiden Touring Car Masters race from pole position after officials elected to void the results of a shortened qualifying session.

The majority of drivers had only completed one flying lap before Rusty French crashed heavily on the entry to Turn 5.

A statement from the event secretary has subsequently confirmed that the grid will now be set by the combined practice times.

Fifth fastest in the shortened qualifying, Ritter had impressively topped both practice sessions in his first drive of Tony Hunter’s Chevrolet Monza.

John Bowe will start second ahead of Tony Karanfilovski, Eddie Abelnica and Johnson.

Bowe’s title rival Jim Richards is arguably the biggest beneficiary of the change, moving from 17th to seventh.