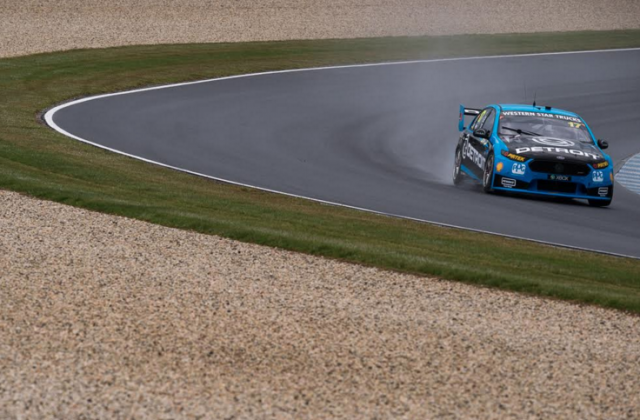 The 60 minute session started in full wet conditions, with early flying laps in the 1:48s bracket and beyond.

It took almost 40 minutes before the track was good enough for slicks, after which times tumbled quickly. “We haven’t done that much running in the wet so we experimented a lot with (tyre) pressures and set-up,” said Pye, who scored a career first podium last time out at Pukekohe.

“I felt like just before we went to the slicks we were fairly strong and the guys just put the car back to a dry set-up and we’ve rolled out competitive again which is great.”

Pye and Kelly had a tight moment after their fastest laps when the Nissan went off at Turn 1 and rejoined in front of the Ford, which then ran off at Turn 2 in avoidance.

“I was hoping that he’d be a little bit further back (when he rejoined) so that when I got to Turn 2 I could go around him,” said Pye.

“Unfortunately though when you rejoin off the wet track he’s going to come arrowing across, so I just took the precautionary side and gave him plenty of room and ran off myself.”

Percat completed the entire session aboard the #222 Lucas Dumbrell Motorsport Holden and was among many to briefly sit atop the order as the track dried.

Newcomers Dean Canto and Chris Pither were arguably the most hurt by the weather, ending up at the bottom of the order in 24th and 25th as they adapt to the Erebus Mercedes and Super Black Ford respectively.

Fabian Coulthard, Reynolds and McLaughlin were among those to have off track excursions in the early wet running, but each was able to rejoin without damage.