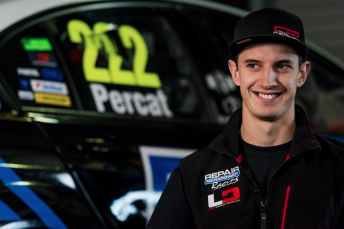 The 27-year-old was given the green light by the category’s medical delegate Dr Carl Le after arriving at the circuit this morning.

Percat spent a week in hospital in the lead-up to the event receiving antibiotics via intravenous drip after a burn on his foot contracted an infection.

The driver will take the wheel in practice before a decision is made on whether he’ll complete the weekend.

LDM has Karl Reindler at the circuit on standby to take over if Percat elects to withdraw.

Practice is set to get underway in wet conditions following intermittent rain throughout the morning at the Victorian venue.

“We’ve got three specialists and a professor on it and they can’t get to the bottom of it,” said team manager Barry Hay of Percat’s issue.

“He’s had heaps of drugs pumped through him and he may even go back to hospital straight after this (today).

“He’s still not fantastic. He’s better, but not great.

“He’s probably had his bacon saved a little bit because it’s wet. The stopping force is not quite as cruel.

“At the end of the day the bigger kicker will be what the pain is and if it swells up again we’ll make a decision tonight on a replacement.”

The weather provides an extra challenge for substitute drivers Dean Canto and Chris Pither, who have joined Erebus Motorsport and Super Black Racing for the weekend respectively.