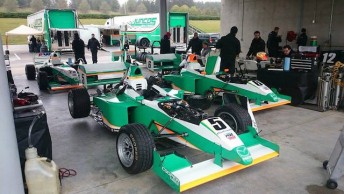 Parsons, a winner of the 2014 AsiaCup, will follow in the footsteps of fellow Australian Matthew Brabham who took the Pro Mazda title in 2013 with a record-breaking performance.

“I’m delighted to be joining a winning team in Juncos as my career moves to America,” Parsons said of his move into what forms part of the Mazda Road to Indy ladder system,.

Parsons has since travelled to the UK to spend time testing in a GP2 simulator, posting competitive times.

“I have a lot to learn but I know this is the best place to do that,” Parsons said.

“It’s been a very smooth and positive start. The pace has already been strong and I’ve integrated well into the team.”

Established in Argentina by Ricardo Juncos back in 1997, Juncos Racing has a strong pedigree in the IndyCar feeder system, with Spencer Pigot winning the 2015 Indy Lights Championship for the team.

Conor Daly, who has been an advisor for Parsons during his US move, won the 2010 Pro Mazda series with Juncos.

Parsons will now join Juncos for the official Pro Mazda two-day test at Circuit of the Americas this weekend.

Next Story Porsche springs to 1-2 in Bahrain WEC qualifying