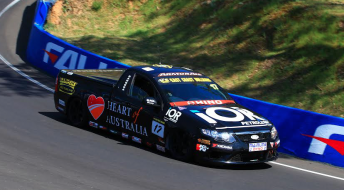 V8 Utes driver Mason Barbera has had his licence suspended until the end of the year following a CAMS disciplinary hearing.

The 18-year-old was referred to a disciplinary hearing last month after pleading guilty to a dangerous driving charge for causing a crash during the Supercheap Auto Bathurst 1000 event in October.

Barbera made contact with Adam Beechey during Race 3 at Forrest’s Elbow that saw the latter collide with the outside wall.

Stewards had recommended a six-month suspension but CAMS officials decided at a hearing this week to suspend him until the until the end of the year.

As a result, the rookie driver from Bundaberg will miss the final round of the championship at Sydney Olympic Park from December 4-6.

“Although it was a tough year we learnt a massive amount,” Barbera said after the suspension was handed down.

“Next year I’m going to come back with a more mature head and try to earn some respect back in the field and have more competitive races and less mistakes.”

Barbera is the second driver from the category to receive a suspension this year after Geoff Fane was banned from CAMS events for more than eight months in April.

Fane, who was found guilty of dangerous driving at the Clipsal 500, was also hit with a $10,000 fine and excluded from the meeting.

Next Story New V8 Ute platform pushed back to 2018