The CAMS Jayco Australian Formula 4 Championship will host its final round at New Zealand’s Highlands Park circuit next season.

The new junior single seater series has confirmed a seven-round, 21-race calendar which will culminate with the final round on the undercard to the Highlands 101 GT endurance race.

The 2016 championship will begin at Symmons Plains (April 1-3) followed by a visit to Phillip Island, before joining the Shannons Nationals at Sydney Motorsport Park.

Formula 4 will feature on the V8 Supercars support bill at Queensland Raceway, Sandown and the Gold Coast before the offshore finale.

CAMS has elected to form a calendar which focusses more on permanent circuits to aid the development of aspiring young drivers aiming to further their single seater careers in Europe.

“We have been working on a calendar featuring purpose built circuits because they suit the cars are shown off the best,” McConville told Speedcafe.com.

“For the drivers wanting to go to Europe, we need to try and put them on circuits similar to those found overseas not street circuits.” 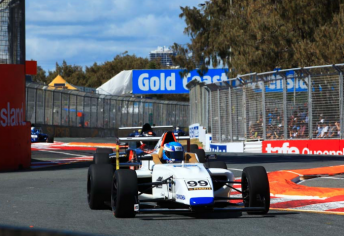 The move could help facilitate McConville’s plans for a Trans Tasman F4 series as outlined earlier this year.

McConville also reiterated that costs to teams have been thoroughly evaluated before committing to the trip.

“We are keen to go there and showcase F4 to the New Zealand market,” McConville said.

“I think it is possible we could have three or four Kiwis on the grid for that last round.

“We know that the TRS (Toyota Racing Series) operates very strongly over there but it doesn’t have a big New Zealand driver contingent.

“If we can entice some Kiwis onto the grid potentially there could be a bit of a Trans Tasman set-up we could build.

“I have had discussions with Gibson Freight and they would like to support the category.

“Between Tony’s hospitality of allowing us to race there at a good arrangement with fees, etc, and a bit of help from Gibson Freight it will be the same cost as doing a local round an that is what we are working towards.

Meanwhile, plans are already underway for the 2017 season with the category hoping to land a slot on the Formula 1 Australian Grand Prix support bill after missing out on a berth for next season.

“We worked probably for the last three months to get F4 on the grid at the Australian Grand Prix,” added McConville.

“The Australian Grand Prix Corporation were very engaging and open to it but the decision had to come from Formula One Management but that has made that hard to make that a possibility for this year.