The Ford GT in action at Daytona

Australian Ryan Briscoe is this weekend set to be named among the drivers for Ford’s 2016 IMSA SportsCar Championship assault.

Ford executives will join team owner Chip Ganassi to confirm the squad’s line-up for its two full-time entries in the American championship at the NASCAR finale in Miami.

Sydney-raised Briscoe has extensive history with Ganassi, including competing in the 2005 and 2014 IndyCar seasons with the team.

The Ford deal follows Briscoe’s impressive outings in the SportsCar Championship’s endurance races with the factory Corvette outfit over the last two years.

Corvette has already announced its own reshuffled 2016 line-up, with Ricky Taylor replacing Briscoe for the Le Mans 24 Hours.

Audi stars Marcel Fässler and Mike Rockenfeller have been brought into the General Motors operation for the IMSA enduros at Daytona and Sebring as part of the changes.

The Kiwi has been been an annual fixture in its Daytona line-up since 2005, winning the race aboard Riley prototypes in 2006 and 2015. 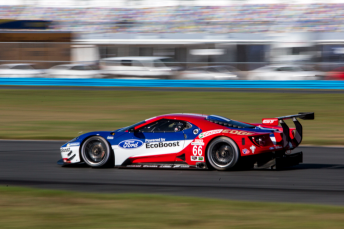 Two Ford GTs are among a fleet of IMSA entries testing at Daytona this week ahead of the January 30-31 race.

Among the drivers testing is Frenchman Sebastien Bourdais, who is tipped to join the squad as an endurance driver, switching from the Action Express prototype team.

“It’s great to see it here in the new paint scheme, and to show the car to other people. We no longer have to be secretive about the project.

“We’re still sorting out the car and cycling our potential drivers through the Ganassi system. So far, the car’s working flawlessly.

“Our main objectives here are to put miles on the car and work on durability, see what’s going to break, and get the drivers comfortable with the car and working with each other and the engineers.”

Drivers for Ford’s World Endurance Championship program with the car, which includes the Le Mans 24 Hours, are not expected to be confirmed for some time.

One driver definitely out of the picture is 12-year Ganassi sportscar veteran Scott Pruett, who has split with the team to join Lexus’ new GT3 project.