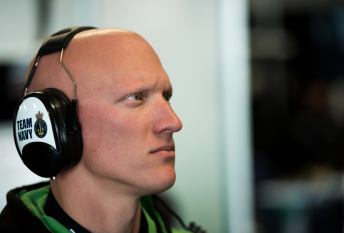 The move comes in a bid to help find a set-up direction for its Mercedes-Benz AMGs, which have struggled for competitiveness at recent events.

Joining the team with the blessing of Prodrive, Canto has recent experience of front-running machinery thanks to his Pirtek Enduro Cup stint with the Ford team.

In what is currently slated as a one-off drive for Canto, Walsh will remain with the team throughout the weekend, learning from the garage.

Canto has previous history with Erebus having driven for the squad at this year’s Bathurst 12 Hour.

“When I was approached by the team to see if I could help out at Phillip Island I grabbed the chance,” said Canto.

“As a race car driver, you jump at the opportunity to get into a car so I was more than happy to help out and do my bit.

“I’ve worked with Barry (Ryan) at the 12 Hour, and with Campbell (Little) in the past, so there are a few familiar faces at the team which is always good.

“It’s an opportunity to help out the team and Ash, but also it works both ways, and I’m happy to be in a race car for the weekend.”

Erebus general manager Barry Ryan stresses that Walsh should benefit from Canto’s assessment of the car.

“In order to operate at the highest level in this series, there can be no substitute for hardened race miles which was key to selecting Canto,” said Ryan.

“We are working with Ash to improve results both for him and for the team.”

The team is also known to have considered placing its enduro co-driver Alex Davison in the seat at Phillip Island before opting for Canto.

Walsh currently has a two-year deal with Erebus but appears no certainty to return to the squad next year as both parties assess their options.

The 27-year-old currently sits 25th in the championship standings after a tough season that has included several on track incidents.

The driver complained of physical discomfort in the car earlier in the year, resulting in considerable mid-season work on cabin ergonomics.

Walsh has spent the majority of the season working with a first-year race engineer in Richard Harris following the early season departure of Erebus/Stone Brothers veteran Wes McDougall.

Canto meanwhile remains contracted to Prodrive for next year’s Enduro Cup, meaning he is unlikely to follow long-time partner David Reynolds to the Mercedes team unless he is offered a full-time opportunity.