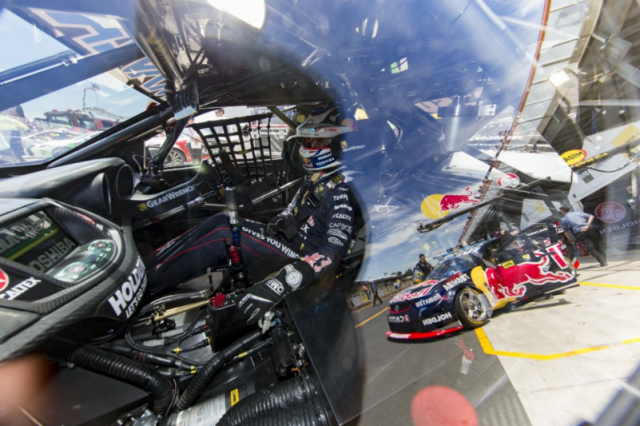 Red Bull Racing Australia has vowed to turn up the pressure on Prodrive at Phillip Island this weekend as the two squads battle it out for the V8 Supercars teams’ championship.

The Holden squad cut its deficit to the Pepsi Max Crew PRA’s from 520 points to 288 over the Pukekohe weekend, despite a costly crash for Craig Lowndes.

A total of 576 points can be scored by two-car teams at each event, ensuring the battle remains far more open than that for the drivers’ championship, where Mark Winterbottom holds a healthy lead.

The Red Bull/Triple Eight outfit has won six teams’ titles in the last seven years, including the last five in succession, while the Pepsi Max backed outfit is still looking for its first.

Prodrive appeared a certainty for the championship earlier in the year before an injury to its driver star Chaz Mostert and the late season resurgence of the Red Bull entries.

The Holden Racing Team also remains in the championship fight, albeit 101 points further back after a torrid weekend at Pukekohe.

“It’s one that we can win without relying on our opposition to make any mistakes, we can do a good job and achieve that.

“The drivers’ championship obviously, we need to do our job, but we’ve also got to put pressure on them to sort of fail a little bit at their job.

“The teams’ championship is a huge deal to us. It (determines) where you sit in pitlane (next year), which alters your strategy and how you run sessions.”

The battle for the V8 Supercars Manufacturers’ Award, which is determined solely by a tally of race wins during the season, has also tightened up in recent events.

Holden has won the Manufacturers’ Award for the last five straight years, taking it out 10 times since it was introduced in 2000.