Supercheap backing for Chaz Mostert in 2016 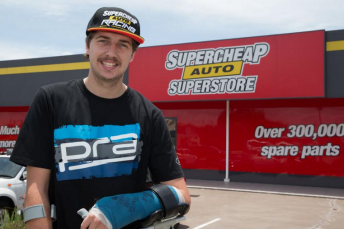 Chaz Mostert will drive a Supercheap Ford in 2016

Supercheap will move from Walkinshaw Racing to become the primary sponsor on Chaz Mostert’s #6 Ford.

The deal sees the automotive parts and accessories retailer continue an unbroken run of naming rights backing in V8 Supercars that began in 1999.

Linking with Mostert, who won five races this year before a season ending crash at Bathurst, will give Supercheap a strong chance to end its long victory drought.

All four of the sponsors race wins in the V8 Supercars Championship to date came with Greg Murphy and PWR during the 2005 season.

Whether the team’s current primary backers Pepsi Max or The Bottle-O will return is yet to be be confirmed.

“To add a brand as strong and supportive as Supercheap Auto to our team is very satisfying, as we want to work with industry-leading brands and they are just that,” Edwards said.

“They are a partner that heavily promotes the sport and their involvement in it and as a team that prides itself on being at the forefront of sponsorship activation I am sure it is going to be a successful relationship on and off track.

“In Chaz they have a true star of the sport. He has the right personality and was enjoying the best year of his career up until his crash.

“Together I hope they grow into a front-running combination for years to come.”

In addition to its on-car sponsorship, Supercheap Auto is a V8 Supercars partner and naming rights backer of its flagship event, the Bathurst 1000.

Mostert says that driving for Supercheap would make a comeback success at the event even sweeter next year.

“To win the Supercheap Auto Bathurst 1000 in Supercheap Auto colours would be very special and that will be our aim next season after we got bitten pretty badly by the track this year,” he said.