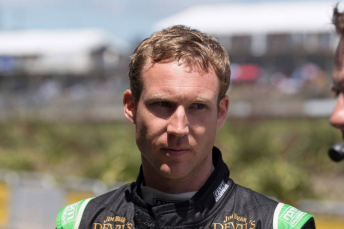 David Reynolds says that a lingering foot injury will not hinder his quest to chase down championship leader Mark Winterbottom at Phillip Island this weekend.

A scan last week revealed that Reynolds has a collapsed bone in his right foot, explaining pain that the driver has experienced for as much as two months.

The 30-year-old admits that the injury has hindered his training schedule and is noticeable in the car, where like most of the field he uses his right foot to brake.

Despite the issue, Reynolds took the third race win of his career less than two weeks ago at Pukekohe, closing to within 239 points of Winterbottom with two events remaining.

“It’s nothing too serious, it’s just a bit of pain,” Reynolds told Speedcafe.com.

“Essentially the sesamoid bone I’ve got on my right foot has collapsed and died and is just causing me pain when I walk or train.

“I do notice it in the car, but it doesn’t affect my performance. It’s just a good excuse to get out of track walks.”

Reynolds is unsure whether the injury was sustained by impact or fatigue, but says that it should heal itself over the off-season.

“The best medicine is rest, just to try and let it heal,” he said. “There’s only two rounds left, so I’ll get through it.”

With only 600 points remaining across this weekend’s Phillip Island event and the season finale in Sydney next month, Reynolds remains very much an outside shot at the championship.

If Winterbottom wins all three races at the Island, Reynolds will need to finish fourth or better in each heat in order to remain a mathematical chance in Sydney.

“I can only go out there and try my best to win every race and whatever else happens is out of my control,” he said of the title fight.

“I’ve got to stay out of trouble, make the most speed out of my car in practice and qualifying and have mistake free races.

“That’s exactly what I’ve tried to do all year.”

Reynolds’ best finish from 14 previous race starts at Phillip Island is a sixth place, while Winterbottom has two career wins and seven podiums.

Despite his lacklustre recent record at the venue, Reynolds says he enjoys the circuit and is looking forward to attacking it with the FG X model Falcon for the first time.

“In my younger categories it was always my best track and even in the first couple of years in V8s I had good pace there,” he said.

“The last couple haven’t gone that flash, but generally if a driver is not winning it’s not because they can’t drive, it’s because the car is not making any grip.”

Next Story Battle on for 'massively important' teams title