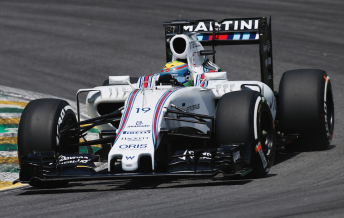 Williams will appeal Felipe Massa’s exclusion from the Brazilian Grand Prix after his tyres were found to have exceeded the permitted starting temperature.

The FIA claim the temperature of the Brazilian’s right rear tyre was measured at 137 degrees well above the maximum of 110 degrees stipulated by the newly introduced sporting regulations.

“The rear right tyre on car 19 did not comply with the maximum tread temperature as specified in the event preview of the official tyre supplier,” read statement from the FIA.

“The temperature of the right-rear tyre was measured in compliance with the FIA technical directive TD/029-15 (that relates to minimum tyre starting pressures and maximum tyre temperatures in blankets),”

As a result, Massa has been stripped of his eighth place finish at his home grand prix elevating Romain Grosjean to the position, Toro Rosso’s Max Verstappen to ninth and Lotus’ Pastor Maldonado into the final points paying position.

Williams intend to fight the decision after claiming they have proof that Massa’s tyres were within the stipulated parameters.

“The notice of appeal that we will make is based around the fact we have three independent temperature readings and all of them say how we are within the limits set by Pirelli and the prescriptions for this event,” said Williams chief Rob Smedley.

“We have two independent sensors, the first one is the PT1000 which sits inside the tyre blanket and tells us what the surface temperature is and that one was always in compliance with the regulations.

“The last time we could read it, when they took the set off to the grid, it was about 104 degrees.

“So we have two independent sensors which both say we were in compliance with the regulations and we have data to back that up.

“We have also bought exactly the same sensor that the FIA uses and we do random checks throughout the weekend to make sure this does not happen.”

Williams had secured third in the constructors’ championship prior to Massa’s disqualification.