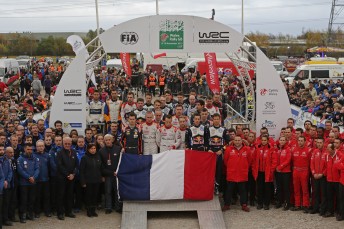 Sebastien Ogier claimed an emotional victory at a storm-lashed Wales Rally GB and dedicated his success to victims of the Paris terrorist attack.

The three-time world champion considered pulling out of the final round of the 2015 FIA World Rally Championship on Saturday morning but decided to continue and secured his eighth victory of the season by 26.0sec from Ulsterman Kris Meeke, whose French Citroen team also persevered despite the tragedy.

“We’re happy to finish the season like that from a sporting view, but my mind wasn’t really there this weekend,” said Ogier.

“It was hard to carry on after the tragedy in France and our thoughts were with the people. We wanted this victory as our small sign for those who have been touched and to show we must be even stronger against these things.”

Wales Rally GB was Ogier’s eighth win in the 13-round season, while Volkswagen drivers won all but one round. On Saturday, the team celebrated its 500th stage win since joining the championship in 2013 and the Polo R WRC is now the most successful car in WRC history.

The weekend also marked an end to Wales Rally GB’s position as the WRC season finale, with the 2016 calendar giving the prize spot to Rally Australia on the New South Wales Coffs Coast on 17-20 November.

Ogier led the three-day Welsh event from start to finish in some of the worst conditions of the year. Torrential rain and gale-force winds pounded the forests of north and mid-Wales, but Ogier never put a wheel out of place on treacherous gravel tracks.

Meeke also delivered a fine performance. The DS3 driver refused to risk all in chasing Ogier, taking a measured approach which, combined with Mads Ostberg’s seventh place, enabled Citroen to beat Hyundai for second in the manufacturers’ championship.

Andreas Mikkelsen completed the podium in another Polo R, but it wasn’t enough to secure second in the drivers’ championship. That went to teammate Jari-Matti Latvala, who twice retired in the opening two legs before claiming maximum bonus points in Sunday’s event-closing Power Stage.

M-Sport Ford Fiesta driver Ott Tanak crashed out of fourth in Sunday’s opening stage, allowing Dani Sordo to regain the place he yielded earlier by spinning into a bank. The Hyundai i20 driver finished 9.2sec ahead of teammate Hayden Paddon of New Zealand.

“An amazing season with Hyundai and we’re really looking forward to 2016,”said Paddon.

“We’ve got a really busy winter now ahead to prepare with testing and further develop and fine-tune our systems so that we can come out fighting next year. It’s all really good; bring on 2016!”

Welshman Elfyn Evans delighted home fans with sixth in a Ford Fiesta, 8.6sec behind Paddon and 1min 20sec ahead of Ostberg. The Norwegian ran as high as fourth before sliding into a ditch and spent much of the rally mopping up muddy water which entered his DS3’s cockpit through a hole in the floor.

Stephane Lefebvre overcame flu to take eighth in another DS3, with Robert Kubica and Lorenzo Bertelli completing the leaderboard.

Although the season has ended, the manufacturer teams will go into testing almost immediately with the first 2016 round just 10 weeks away, at Rallye Monte-Carlo on 24-26 January.