Nissan Motorsport has announced that Dale Wood will step into the Altima vacated by James Moffat for next year’s V8 Supercars Championship.

Strongly linked to the seat since Moffat’s exit, the move marks a return to the Melbourne-based team for Wood, having driven with the squad full-time in 2009 and for the 2010 endurance races while it was running Holdens.

A close friend of co-owners Rick and Todd Kelly, Wood is expected to bring backing to the drive, as he has done at Brad Jones Racing over the last two seasons.

Nissan already has full-time sponsorship for Todd Kelly (Carsales) and Michael Caruso (Nissan Nismo) locked in for next year, while the future of Rick Kelly’s long-time sponsor Jack Daniel’s is unclear.

The 32-year-old Wood currently sits 21st in the V8 Supercars Championship standings with a season best finish of eighth.

He was 24th last year in a campaign that was highlighted by a standout third at Winton and a third place in qualifying at Bathurst.

In a team statement, Rick Kelly gave a lengthy explanation of Wood’s signing to the factory Nissan team.

“Signing a new driver was a hot topic and something that we spend a lot of time considering,” said Rick Kelly.

“It’s not an easy decision. You have to take all things into account and be able to predict what a driver would be able to bring to our team within our environment, not necessarily what they are achieving in their current environment.

“We consider Dale to be a driver that hasn’t yet reached his potential and look forward to working with him to achieve that. He has the raw speed to be able to achieve results.

“After all, you don’t get a podium in this game, or qualify third at Bathurst, by accident.

“When we signed James Moffat to our team at the start of 2012, it was a similar situation, in that we saw him as a driver who, entering his third full-time season, had the potential to achieve strong results in the right environment.

“James went on to score his first podium and win, his first pole position and his first Bathurst 1000 podium with our team.

“We believe that the same opportunity and potential now lies ahead of Dale as he enters what will be his third full-time season in the V8 Supercars Championship.

“To be a successful professional driver in today’s world, of course being capable behind the wheel is the key characteristic, but there are many other aspects that are also very important.

“These include the ability to work in a team environment, being an asset to our business partners, and presenting well in front of the media, to mention just a few, and we feel these are all areas where Dale will be an asset to Nissan Motorsport.

“It is also nice to have Dale back as a part of our team after he put in so much work behind-the-scenes as we worked to establish our team in 2009.”

Wood, whose resume includes the 2013 Dunlop Series title, added his excitement at the opportunity ahead.

“It’s such a competitive environment in this sport and it takes a few years to find your feet,” he said.

“I see this as an important step in my career to move up the grid and help develop myself as a driver.

“I’d like to thank everyone at BJR for the last two seasons. I’ve really enjoyed working with such a good bunch of people and I look forward to finishing the year strongly with them.

“Achieving the first podium for car #21 was a real highlight and good reward for the hard work the team put in.

“This decision to move to Nissan is designed to help me achieve those results more consistently.

“The last two years have been spent learning and understanding the category and familiarising myself with all the circuits we go to.

“Knowing Rick and Todd quite well, I see this as a great environment – to not only help me achieve what I want with my driving but to also bring results to the team.

“I’ve watched Nissan since they joined the category in 2013 and there is no manufacturer that is as active within the sport. So to be able to join the team now is very exciting.”

The news follows recent confirmation that Wood will compete in next year’s Bathurst 12 Hour aboard Justin McMillan’s new Lamborghini.

The team’s existing car was damaged by fire at the weekend’s Highlands 101 when fuel spilt during a pitstop.

McMillan, who had been joined by Wood for Saturday’s two Australian GT races, was unhurt in the incident.

CLICK HERE for Speedcafe.com’s full report on the Highlands 101. 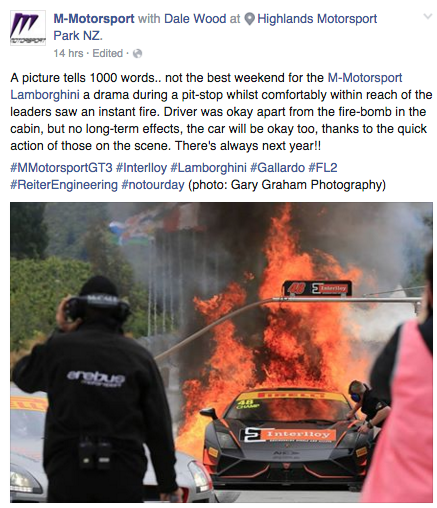