Shane van Gisbergen and Klark Quinn combined to win the Highlands 101 following a tense finish to the popular GT enduro at the New Zealand circuit.

The McLaren 650S pair found themselves locked in a three car battle for the victory in the three hour endurance race before V8 Supercars star Van Gisbergen made a decisive move two laps from the end.

The New Zealander had sat under the rear wing of the race leading Erebus Motorsport entry of Jack Le Brocq for several laps before making the most of a gap that emerged at the carousel. 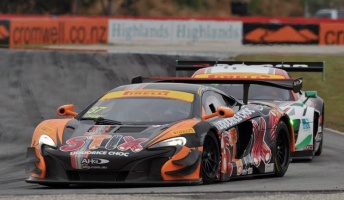 Van Gisbergen shot into the lead with the Jamec Pem Audi of Australian GT champion Christopher Mies following the McLaren through.

Despite a pressure filled final lap van Gisbergen managed to fend off the factory Audi ace to take the win.

Le Brocq, who shared the Mercedes SLS with Saturday winner Morgan Haber, managed to secure the final place on the podium.

“That was one of the best battles I’ve ever had,” said Van Gisbergen.

“I had Chris behind me and we were flat out the whole way at the end there.

“Thanks to Klark; he did a great job all weekend. To have the round win and to win the 101 as well, was just awesome.”

The race had been dominated by the Kiwi Trass family Motorsport Ferrari 458 entry of Jono Lester and Graeme Smyth.

The duo, who started from pole position, had built up a lead of more than 40 seconds before drama struck.

An ill-timed caution period saw them lose the lead but worse was to follow with the entry disqualified from the race after making a pit stop outside of the pit stop window. 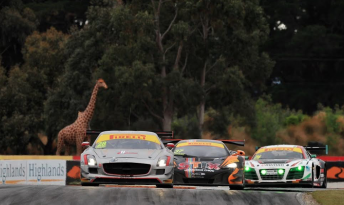 Le Brocq drove admirably for several laps withstanding immense pressure from behind until the penultimate lap.

However, it proved to be strong day for Erebus Motorsport with the sister entry of Shae Davies and Max Twigg finishing in fourth position, ahead of the JBS Lamborghini of Roger Lago and Carrera Cup star David Russell.

After finishing second in the Australian GT Championship, Grant Denyer and Tony D’Alberto (Maranello Ferrari) ran solidly to finish in sixth, with the Objective Racing McLaren of Tony Walls and Warren Luff in seventh. The Trophy Class Porsche of Marcus Marshall and Theo Koundouris completed the top 10.

Tony Quinn and Holden Racing Team star Garth Tander retired in the early stages along with the Justin McMillan Lamborghini, which caught fire during a pit stop.

The Ross Stone Racing Aston Martin of Andrew and George Miedecke had been running strongly before retiring in the closing stages.