A ninth Kerrick Sports Sedan title for Tony Ricciardello proved a fitting result as the Shannons Nationals celebrated the end of an era at Sydney Motorsport Park.

Ricciardello was voted as the Shannons Nationals ‘Driver of the Decade’ as part of the celebrations and didn’t disappoint as he went on to wrap up the Sports Sedan title.

All three heats were won by Jack Perkins, who extended his run to nine consecutive victories while subbing for Darren Hossack aboard John Gourlay’s Audi.

Thomas Randle briefly led Race 2 before his Saab ground to a halt with a kill switch issue, all but ensuring Ricciardello the title before the final race.

“I put some old tyres on the back, put the wing down and had a bit of fun in that last race,” smiled the West Australian afterwards.

“I didn’t want to break anything and give it too much grip. I wanted to work harder in that race and get out there and enjoy it.”

The title was sealed in Race 2, where McAdam fended off rival Alex Rullo in a final dash to the flag on a drying track after a lengthy Safety Car period.

The full course yellows were required to retrieve the cars of Jason Heck and Brendon Strong, who crashed at Turn 5 on consecutive laps. 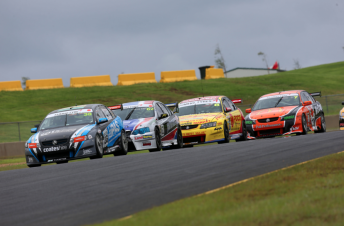 Rullo finished second in both of today’s races, giving his all against McAdam in the final heat before coming up marginally short.

The weekend podium was completed by Matthew Palmer, while fourth overall was enough to give Jim Pollicina the Privateers title.

The duo had taken the lead for good when Bob Pearson’s Pro-Duct Lancer suffered a puncture at the two hour mark and went on to win by two laps from the Mark Eddy/Dean Fiore Audi TT.

Victory avenges a controversial loss for the pair in the same race in 2013, when leader Kostera found himself trapped in pitlane after diving in for fuel just as officials were readying the chequered flag.

Grant Sherrin meanwhile secured the drivers’ title despite the BMW 135i he shared with brother Iain being delayed mid-race by a broken suspension bolt.

The drama appeared set to hand Pro-Duct co-driver Rick Bates the Production Car Championship title, until a blown head gasket on the Lancer swung the points back in Sherrin’s favour.

Sherrin’s season in the category had also included taking out the Australian Endurance Championship, while his efforts helped BMW to the Manufacturers’ crown.

Also concluding today was the Sports Racer Series, which was taken out by Adelaide’s West-mounted Mark Laucke.

Laucke started Race 2 from last following gearbox problems on Saturday, before cutting his way through to fourth.

A second in the final was enough to take the title over Adam Cranston, whose charge was hurt by a false start penalty in Race 2 and damage caused by contact with the back of Laucke in the final.

Next Story Greg Ritter to make racing return in TCM